John Dicandia-Jinndow also known in the art world as “Jinndow” was born and raised in Melbourne, Australia and of Italian heritage. John Dicandia-Jinndow has been creative for most of my life but has been seriously active in artwork only in the last 25 years. He works primarily with ink, graphite and acrylic to convey thoughts about his environment and the human state, both solipsistic and interpersonal, fusing myth and reality. A blend of mediums and ideas that make his work both beautiful and captivating 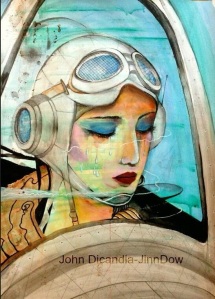 John Dicandia-Jinndow is both a creative enigma in artwork and a delightful writer and illustrator. His work has been published and also has been elected to compliment book covers. John’s curiosity for the human heart is what keeps his work so full of life, with colors and concepts that are naughty and nice, keeping the viewer in suspense and thrilling them with great expectations. 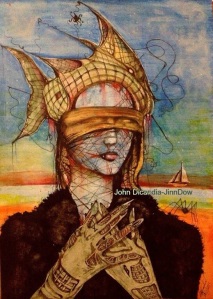 Although John Dicandia-Jinndow has traveled extensively he resides and creates in his home town in Melbourne, Australia. His artistic creativity surfaced at a very young age. When John was 11 years old he began to take an interest in writing. It is hard to pinpoint one source of inspiration. Perhaps it’s from his diverse environment and the people that he has met along the journey of his life. It was then at that very young age that he started writing stories about having really cool friends and going on adventures.

His biggest influence have been numerous, for he has had the fortune to get inspiration from his environment and his peers. John can’t single out one major source of influence or art movement however he does have an affinity to the period from 1890-1940 covering the Belle Epoche, Dadaism, Art Nouvelle and Art Deco. 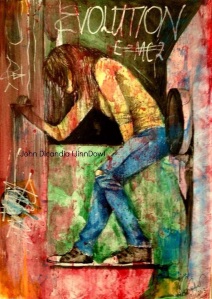 John Dicandia-Jinndow likes to consider his art style to be -Art deco with Gothic and pop art elements” or as he likes to say- “in a nutshell”. He Describes himself as “A puzzle with missing pieces!” His work is as he states “Organized chaos!”

If you wish to explore more about this artist please visit: